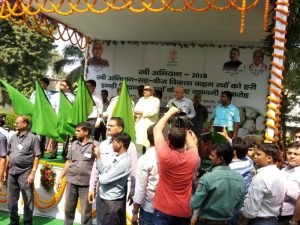 Since independence our country has seen many stages in agricultural development through different approaches in time-slots to develop resources for their optimum utilization. Initially the focus was on human and community development, then to specific crops and fertilizers, treating the state as a unit of planning and lastly on development of resources and their optimum utilization in a sustainable manner within the frame work of resource constraints and potentials of each region. In India food grain production more than quadrupled since the early 1950s from 51 million tons to over 209 million tons in 2000, while population nearly tripled from 350 million to one billion during the same period. Potentially high production areas (Eastern and Central States) are still lagging behind in productivity increases and in research there is a growing disparity between the actual and the potential yields which points to a crucial gap between research and extension.